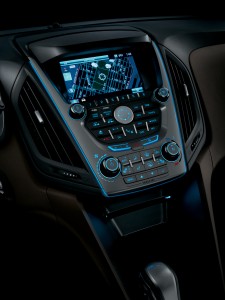 Let’s face it: General Motors was a long-time leader in the field of stagnant (read: old) technology. But over the last few years, The General has developed a slew of new technologies that have gained a lot of ground. Take – for example – the second generation CTS, which brought the luxury car buyer TiVo-style radio. This revolutionary in-car radio technology permitted vehicle occupants to pause and play live radio. Whether the user wanted to remember a phone number during a commercial or a song for later downloading, the system has many benefits that can enhance the experience of owning a luxury vehicle.

This sort of convenient feature is just the style of innovation General Motors needs to continue into the future. But before introducing new features, GM is rolling its existing technology into more models.

The General announced that pause and play live radio will be expanded to two new models including the Chevy Cruze and Buick Regal. This is one additional feature that will not add to the bottom line of either car’s sticker price, as it is included as standard equipment across a wide range of models including the Buick LaCrosse and aforementioned CTS.

Pause and play radio is an important, groundbreaking technology and will no doubt be expanded further into other GM models. This means that yet another luxury car feature is making the move into mainstream – benefiting the experience of new-car buyers. Way to go GM!

Never Miss a Beat: Pause and Play Radio Will Wait for You

You’re driving along listening to your favorite radio station and a commercial playing contains a website address you want to check out. But you can’t – or shouldn’t – be writing while driving.  Wouldn’t it be great to just hit a pause button on the radio?

Pause and play radio is a built-in feature of the High Navigation Radio in the Chevrolet Equinox, Buick LaCrosse, GMC Terrain and Cadillac SRX as well as the Cadillac CTS Jukebox and Navigation radio, on which it debuted in 2008. Pause and play is coming soon to the new Buick Regal and Chevrolet Cruze.

Just like digital video recording at home that lets you capture  live broadcasts and take a break while watching, pause and play radio lets you stop a live broadcast, record up to 20 minutes, and play it back later. It’s as simple as pushing the radio reverse button.

But say you’re listening to a football game on XM Satellite Radio, and your gas gauge is running down with the game clock. Do you risk running out of fuel to catch the end of the game?

Before shutting off the vehicle, the driver can press the radio pause button, shut off their vehicle, get out and fill up, get back in the vehicle and start it, push the radio play button and resume listening to the game it stopped.

The content is stored on an embedded hard drive within the radio.  Listeners can fast-forward and reverse playback as desired.