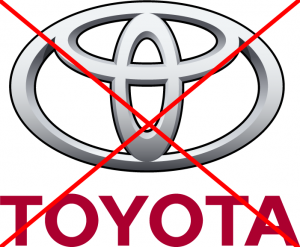 Unless you’ve been living under a rock for the last six months, you’re probably well aware that Toyota, king of quality, has issued some safety recalls due to the infamous unintended acceleration issues. But the story doesn’t end there, as production and sales of numerous Toyota models was put on hold Tuesday morning (the top-selling Camry and Corolla sedans are part of the stop sale). This Tylenol-style precaution may inspire confidence and admiration in some, but instill worry in others – especially those concerned with the safety of their vehicles.

The apprehension over cars that were previously thought invincible has led many Toyota owners to contact GM dealers for information about replacements. Steve Hill, General Motors General Manager of retail activities, said GM dealers received “thousands of calls” from Toyota customers who wanted help buying a GM model. The recent improvement in quality and style at GM makes The General’s products viable competitors and replacements to their Toyota counterparts. So it’s no surprise that GM was quick to respond to Toyota customer concerns by releasing a new set of ads and incentives aimed at disgruntled/worried Toyota owners.

Specific incentives include 0% financing for 60 months with a Toyota trade, or up to three lease payments and $1000 in trade-in assistance.The program is available on most Chevrolet, Buick, Cadillac and GMC models and GM stands to gain a whopping 2.4% of additional market share through this situation.

Toyota’s troubles come at a good time for General Motors, as the time is right to steal back market share – something GM needs in order to meet its profitability projections. This is also a good time to show defected Toyota buyers the quality and reliability of The General’s latest product cycle.

Update: Another blow to Toyota, this time in the form of rental fleets pulling all affected Toyota models. This humble author is hurt by this because I was supposed to have a rental car today but couldn’t get one because of the lack of Toyotas.