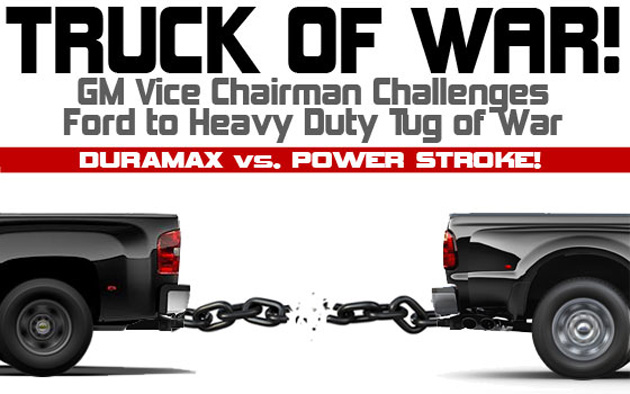 Yes, it’s now officially okay to snicker and make chicken noises towards your F-series-owning neighbor, as Ford wussed out and officially turned down GM’s ultimatum offer of an esteemed (*cough*) truck pull between The General’s upcoming Heavy Duties and Ford’s new Super Duty models. This all started some odd days ago when GM’s Tom Stephens, vice chairman of global product operations, boasted the soon-to-be HD trucks by saying the following:

You know what I want to do to prove it? I want to take our truck and Ford’s [new Super Duty] and chain them together back-to-back. Then I want to have them pull against each other. I know our truck will beat theirs.

Now those are fighting words. However, Ford had the following rebuttal:

We typically don’t respond to challenges. We let the vehicles speak for themselves.

As in, “Hey GM, we have held the number one spot in truck sales for how many years now?” While that may burn some folks, it still doesn’t change the fact that Ford feels it’s above one of the purest forms of truck competition. Maybe Ram would be interested in playing…

While not much has currently been leaked about the next-gen Heavy Duty, they are expected to debut at the 2010 Chicago Auto Show next month and the rumored budget has been an estimated $1 billion. With a budget that size, it’s gotta be good.

While a truck pull may not feel like much to some and “immature” to others – we’d recommend lightening up for the sake of some fun. Ford just can’t handle the powaah. And to stick it to them, GM should winch up a Ford Super Duty (allegedly against its will) to the impending Chevy/GMC Heavy Duty for a future ad and show the world what’s up. May the best truck win.