Attractive, sharp or aggressive are adjectives that were hardly ever used when describing the past Chevy Aveo, but cheap and tinny definitely were. However at the 2010 Detroit Auto Show, we saw a transmutation. As soon as photos of the 2010 Chevy Aveo RS Concept leaked onto the internet before the vehicle’s official unveiling, it was clear that the new compact hatch is an entirely different animal.

If they were giving out awards for biggest surprise in show, this car would take the cake. And that’s not because people didn’t know that it would be shown or because we’ve been anticipating the next-gen Aveo for some time. The reason the Aveo RS Concept is such a surprise is because of the changes made to vehicle, inside and out. GM has pushed the reset button. 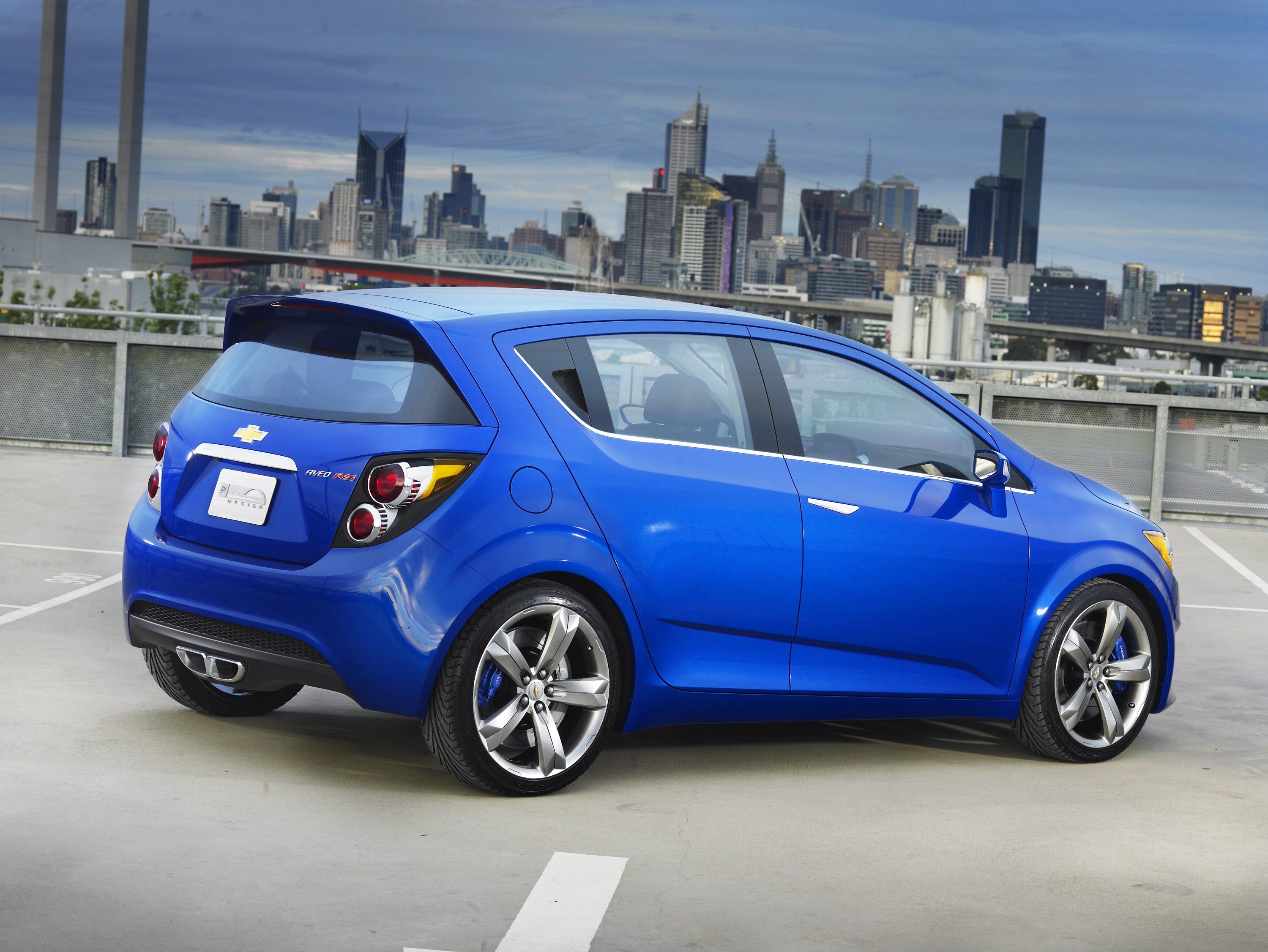 Everything about the Gamma II platform-based Aveo RS Concept is a caffeinated step in the right direction. With its sharp all-new front fascia and open-mouthed double grille that keep the Chevrolet family look intact, it stares the Ford Fiesta and Honda Fit in the face and says, “bring it.” The interior features stitching and accents that match the outside hue of the car, a sporty motorcycle inspired display, a glossy center console, and even leather… leather! But there’s much more to it than cosmetic changes.

Hit up the jump to see what they are and a whole lot more, including a high-res gallery! 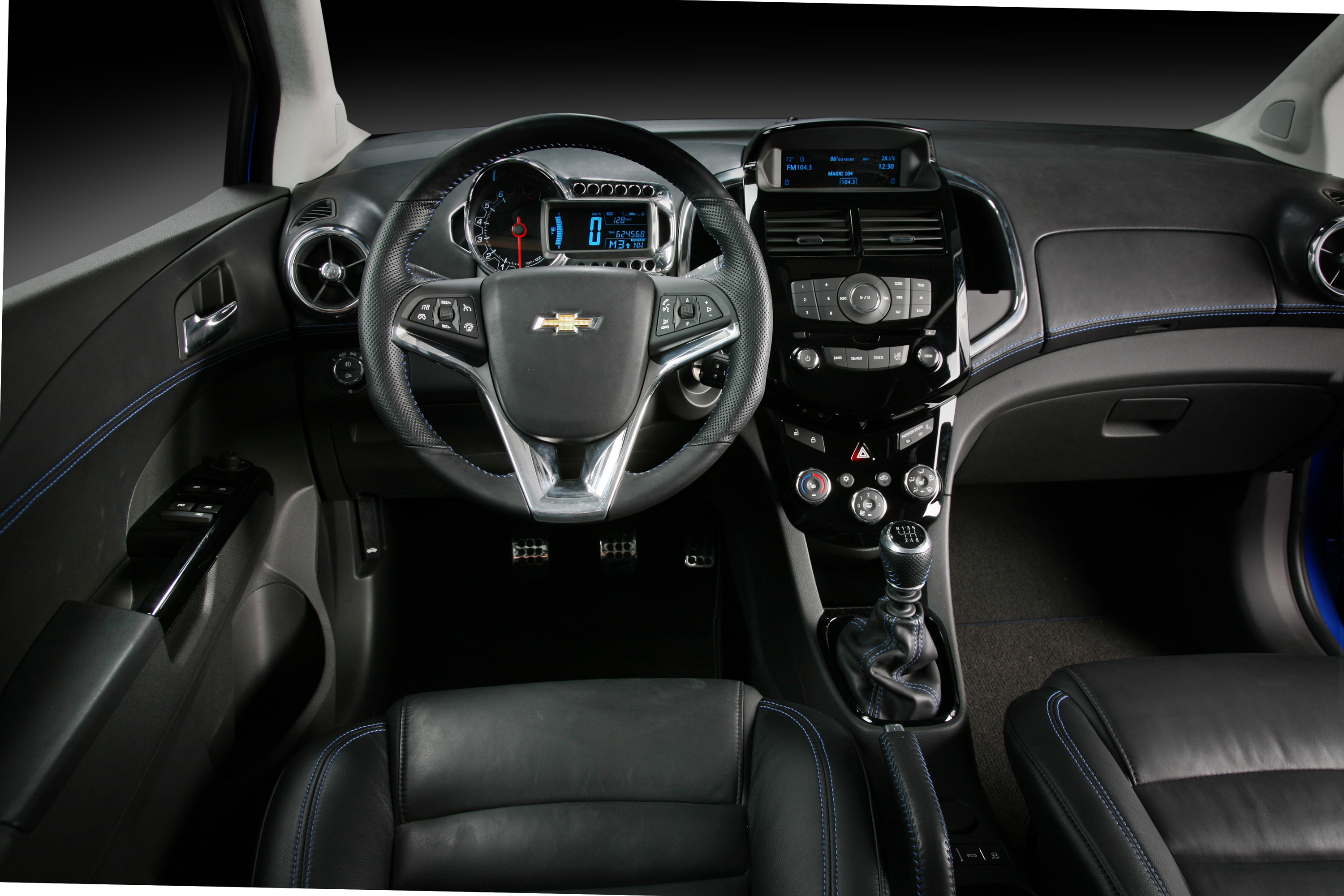 Under the hood sits GM’s global 1.4 liter turbocharged, direct-injected 4-cylinder engine that’s shared with the larger Delta II-based Cruze. The four-banger produces 138 horsepower and 148 ft-lb of torque. That’s 30 horses and 43 ft-lbs more than the current generation Aveo – plenty of bite for a car that should weigh in at a skimpy 2,700 pounds. Though the powertrain is most likely certain, it’s doubtful that some of the other features and design elements will make it to production. This is probably where the “concept” part comes in.

The colored brake calipers and the center mounted dual exhausts that sit flush with the bumper in the rear are probably not going to see the road, and the naked lights are probably going to get covered. But even without these extras, Chevy’s compact has experienced a tuner, hot-hatch renaissance. 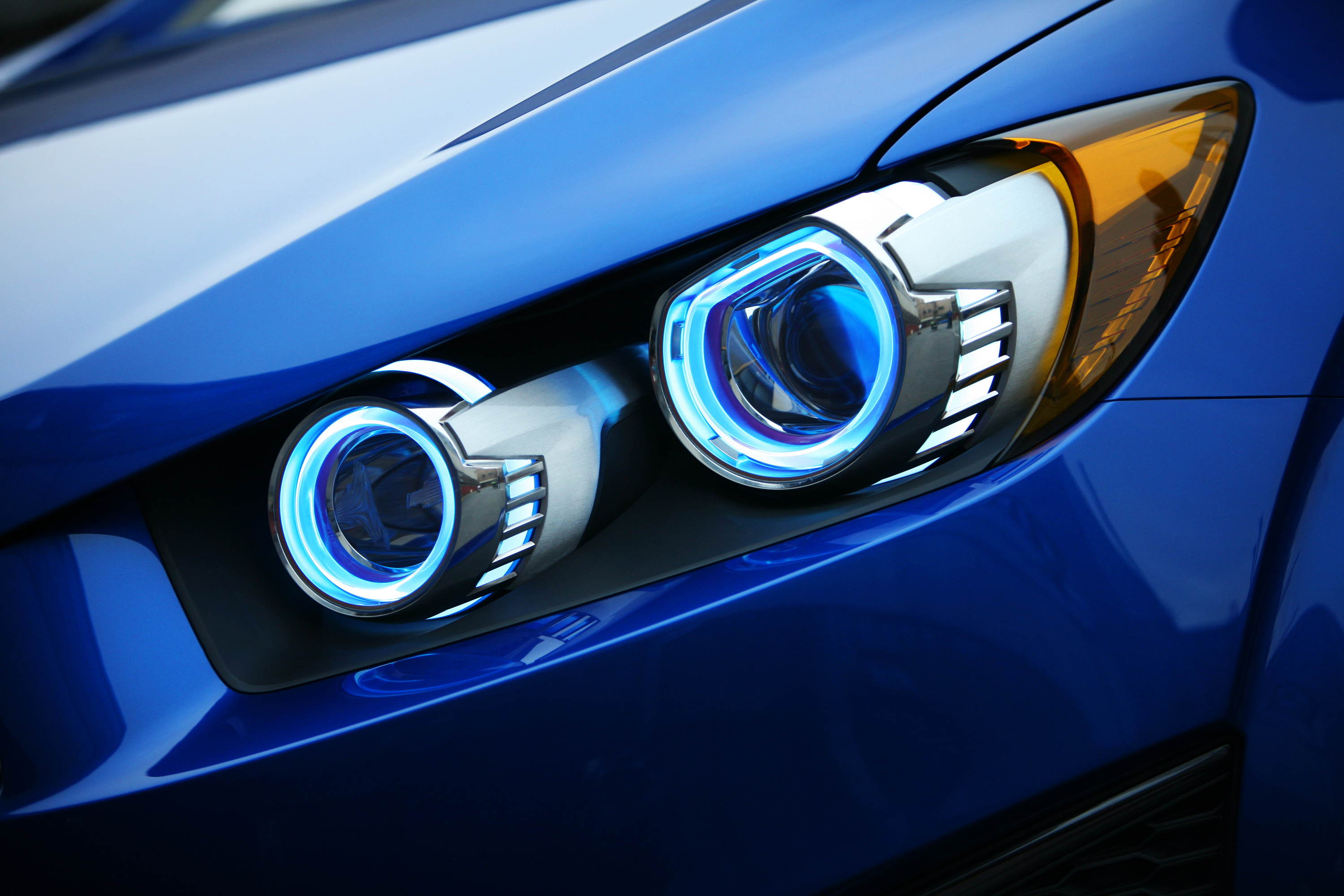 Chevrolet has previously announced the new Aveo will be built at its Orion Assembly in Orion Township, Mich., in 2011, a move that will restore 1,200 jobs to Southeast Michigan. Timing for retooling the Orion Assembly for Aveo production is anticipated to begin in late 2010. The plant currently builds the Chevy Malibu.

To be honest, I’ve never really been excited about anything compact that came out of GM. However, this here Aveo is the first to peak my attention. This must be what Ford Fiesta fans feel like.

Even if it’s just a concept, I expect the fully-loaded production Aveo to be very similar, with all the options such as leather, colored stitching and 19″ wheels.

Here’s the high-res gallery of the Aveo RS Concept below.

DETROIT – Chevrolet today announced the world debut of the Aveo RS show car at the 2010 North American International Auto Show. It features a European-inspired hot hatch look designed to appeal to young enthusiasts, and hints at the next-generation Aveo.

Longer, wider and more spacious than the current production Aveo, the Aveo RS showcases the car’s upscale-looking design cues both inside and out, and presents the many personalization options potentially available on the next-generation car.

“We hope the Aveo RS show car will demonstrate that we are as serious about redefining the Aveo and its place in the small-car segment as we were about reinventing the Malibu,” said Jim Campbell, Chevrolet general manager.

The Aveo RS show car, finished in electric Boracay Blue, wears global Chevrolet design cues such as the dual element grille, round taillamps and fender flares, but designers turned up the attitude on the show car with low openings and a lower mouth trimmed in a combination of brushed and polished aluminum. Outboard fog lamps are integrated into an exaggerated brake-cooling inlet that flows into the front fender flares, creating an aggressive-looking face.

Exposed headlamps, with their brushed aluminum structural surround, are inspired by the designers’ affection for motorcycles. The sleek side profile is characterized by uninterrupted body side lines, a high beltline and low roofline. The side mirrors with amber-colored turn signal indicators carry the same shape as the car and seemingly disappear into the profile. At first glance, the car actually looks like a three-door hatch because the rear door handles are discreetly located in the “C”-pillar area.

“The Aveo RS show car demonstrates how progressive design can inject personality into a small car,” said Michael Simcoe, executive director, North American Exterior Design. “We want customers to see it and have an emotional reaction to it.”

The rear of the show car continues the sport theme, with an integrated spoiler that flows from the roof, a center-mounted exhaust and chrome exhaust tips. The exposed motorcycle-inspired rear taillamps feature tinted aluminum housings and a discreet Bowtie logo.

With its matte black interior highlighted by gloss black, metallic and blue accents, the Aveo RS show car reflects as much attention to detail as the exterior. The Boracay Blue theme continues inside, with accent stitching across the dual cockpit instrument panel, front and rear door insert, steering wheel rim, gear shift boot, parking brake, leather seat bolster and even the floor mats. The integrated center stack holds the gearshift, HVAC controls and the sound system, including a USB port. Ice-blue backlighting on the audio display, telltale indicator screen and knobs augments the blue stitching.

The motorcycle inspiration also carries inside, with a round, analog tachometer set within an asymmetrical LCD readout also trimmed in milled metal with round cutouts; and round, aluminum-trimmed side vents.

The interior is as functional as it is stylish, with storage compartments in the center stack and doors. The rear seats fold flat for carrying larger items.

The Aveo RS show car is powered by the same highly efficient 138-horsepower (103 kW) 1.4L I-4 Ecotec turbocharged engine that will be available in the upcoming Chevrolet Cruze.

A six-speed manual transmission is designed to ensure the car will provide a spirited driving experience.

For the show car, designers created a special engine cover in graphite silver with a brushed aluminum insert. The coolant and power steering fluid fill caps are rimmed in ice blue, and the honeycomb vents flanking the center of the cover are matte-finished in shadow chrome and designed to match the wheel color.

Chevrolet has previously announced the new Aveo will be built at Orion Assembly in Orion Township, Mich., in 2011, a move that will restore 1,200 jobs to Southeast Michigan. Timing for retooling Orion Assembly for Aveo production is anticipated to begin in late 2010.

Chevrolet is one of America’s best-known and best-selling automotive brands, and one of the fastest growing brands in the world. With fuel solutions that range from “gas-friendly to gas-free,” Chevrolet has nine models that offer an EPA-estimated 30 miles per gallon or more on the highway, and offers two hybrid models. More than 2.5 million Chevrolets that run on E85 biofuel have been sold. More information can be found at www.chevrolet.com. For more information on the Volt, visit http://media.gm.com/volt.

Note: Information shown is current at time of publication.