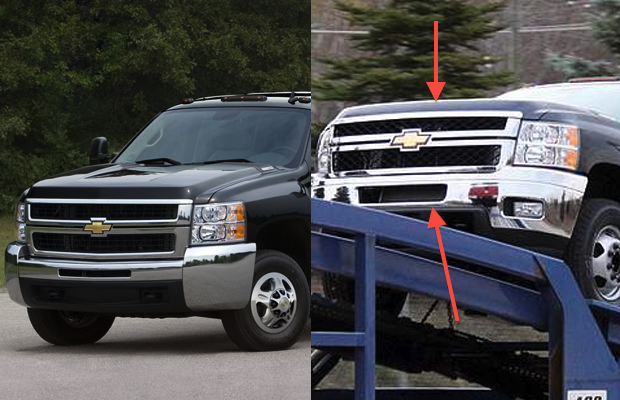 As we reported last week, next-month’s Chicago Auto show will bring with it a heavily updated Chevy Silverado Heavy Duty. Here’s a round-up what we know so far:

It’s been rumored for quite some time that the new Silverado HD will ride on an all-new chassis. Whether that means a move away from the current torsion bar front suspension to a different setup such as the Ram HD’s multilink coilovers or Ford Super Duty’s solid front axle remains to be seen.

From the latest spy shots of the next-gen Silverado HD, however, it seems that GM is perfectly satisfied with the current front running gear.

We can just make out what appear to be torsion bars.

Update: we’ve just received a tip that the styling of the new Heavy Dutys will be substantially revised and border on aggressive. The minor styling changes to the front fascia (described below) are a styling change  made only to the mules.

What’s more, the same spy shots are show minor revisions to the sheetmetal, especially the front end. For example, this one-ton Silverado 3500 dually sports a smaller top inlet and a bigger Chevy bow tie. The biggest change up front, however, seems to be the softening of the metal flares at corners of the front bumper – the design aspect debuting on the GMT-900 trucks that irks many a Silverado fan. The 2011 model’s flares seem to have been cut from top to bottom, leading to an extended plastic

front air dam that now runs the full width of the front bumper.

Moreover, the inlet in the middle of the front bumper that feeds air to the truck’s transmission has seen an increase in size by at least 100%. This seems to be in response to the greater cooling needs of the next-gen 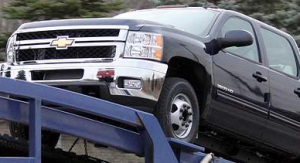 We can just make out what appear to be torsion bars

Heavy Duty’s Duramax V8. While minor, these cosmetic changes make the Silverado’s front-end look cleaner and sharper, something we always approve of.

The Heart Within The Beast

Speaking of the Duramax, the next-gen Silverado 2500 and 3500 are expected to be powered by the highly-acclaimed 6.6-liter Duramax diesel V8 developed in collaboration with the diesel experts at Isuzu. The large V8 will most likely contain a urea solution to decrease nitrous oxide emissions.

The 2011 Chevy Silverado HD is expected to start production sometime in the first half of 2010 and be sold as a 2011 model.

How will it stack up against competitors at Ford and Dodge? There’s only one way to find out!