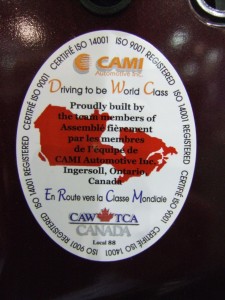 Today GM announced that it will obtain 100 percent ownership of the CAMI Automotive Incorporated (CAMI) manufacturing plant. It will do so by acquiring shares currently owned by Suzuki Motor Corporation, whose stake represents a 49 percent ownership in the facility.

The CAMI plant builds the highly successful Chevy Equinox and GMC Terrain crossovers and is doing everything in its power to keep up with high demand for those vehicles. In fact, demand has been so high that The General has added a third shift, scheduled regular overtime for the plant’s workers, and even spent over $93 million on a new body shop to increase production capacity by 40,000 vehicles per year.

Before acquiring full ownership of the plant, GM was pumping big bucks and building very important products at a facility of which it only owned 51 percent. The amount GM spent to acquire the remaining 49 percent stake wasn’t disclosed, but we’re guessing it was much less than building a new plant – which can easily cost over $1 billion.

Originally known as Canadian Automotive Manufacturing, Inc, CAMI was founded in 1986 in Ingersoll, Ontario (Canada) as a partnership between General Motors of Canada Limited and Suzuki Motor Corporation. The plant was GM’s third step of its three-pronged approach in the mid-1980s to adopt and practice the Japanese allure of automotive management. The first two initiatives are now-defunct NUMMI facility in California (a partnership with Toyota) and the automotive graveyard-bound Saturn Corporation that was meant to put GM’s learnings from the other two plants into practice.

“GM Canada recognizes that the culture and values of the CAMI workforce have played a key role in producing world class vehicles,” said Arturo Elias, president of GM Canada.  “Bringing CAMI completely into the GM family is a strong vote of confidence in the people there and builds on the recent positive news at the plant since the highly successful launch of the Chevrolet Equinox and GMC Terrain.”

In November alone, sales for these vehicles increased over 17 percent. To keep up with demand, GM is rapidly expanding capacity at CAMI through scheduled overtime, the recent addition of a third shift and commencement of a C$90M body shop expansion to increase capacity by an additional 40,000 vehicles annually – great news for GM, the employees at CAMI and the community in Ingersoll, Ontario.