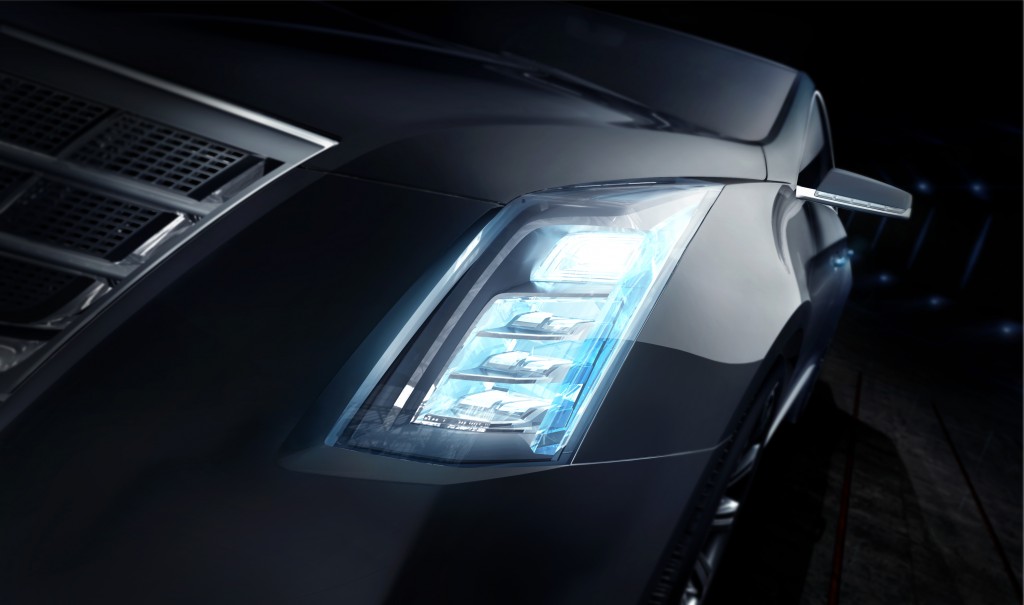 Cadillac has just revealed its plans for the 2010 North American International Auto Show – a new concept and the production-intent version of the stunning CTS-V Coupe.

As is standard practice, we weren’t given any info about the concept (pictured above) – but we’ve been assured that it’s totally new and something we haven’t laid eyes on yet. The photo of the concept is fairly obscured by dark tones and shady angles, but if we look hard enough, we see four doors… or maybe that’s just the teaser playing mind tricks. Caddy says that its “latest concept advances the brand’s Art & Science philosophy.” So what do we think it is?

Since it has four doors, we’re guessing it to be either the ATS compact (3-series fighter) or the XTS large sedan, both of which have been confirmed by GM during this summer’s media preview. Whatever it will end up being, expect the concept to be high in performance or environmental friendliness – or even both!

In addition to the mysterious concept, Cadillac will also unveil its production version of the gorgeous 2011 CTS-V Coupe. Expect all the fixin’s of a CTS V-spec model: 556 hp and 551 lb.-ft. of torque coming from the 6.2-liter supercharged LSA V8, available with your choice of six-speed auto or manual transmissions, sport-tuned suspension with MagneRide technology, and 19-inch alloys. Production of the CTS-V coupe is scheduled to begin in the summer of 2010 as a 2011 model.

Before the 2010 NAIAS begins, check out the high-resolution teaser of the concept (above). We also have GM’s short press release after the break.

DETROIT – Cadillac will premiere a new concept car at the 2010 North American International Auto Show in Detroit on January 12, the latest in its series of dynamic designs. This latest concept advances the brand’s Art & Science philosophy that has included a series of acclaimed concept cars in recent years, such as the Cadillac Sixteen, CTS Coupe Concept and Converj.  The 2011 CTS-V Coupe will make its world premiere in Detroit as well, and will enter into production in the summer of 2010.

Cadillac has been a leading luxury auto brand since 1902. In recent years, Cadillac has engineered a historic renaissance led by artful engineering and global expansion. More information on Cadillac can be found at media.cadillac.com.