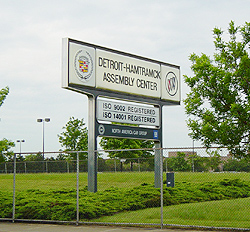 Yesterday we reported that GM is spending $336 million to retool the Detroit-Hamtramck plant to manufacture the Volt and its worldwide brothers, the Opel/Vauxhall Ampera. Today we’ve learned that the plant will also produce the 2012 (next-gen) Chevy Malibu, with Frank Moultrie, chairman of UAW local 22, confirming as much.

The current-generation Malibu (along with the 2010 Buick LaCrosse) is built at GM’s Kansas Fairfax plant. Until last month, the mid-size Chevrolet sedan was also produced at the Orion Township facility (Michigan), but that plant is in the process of being retooled to build a next-generation small car (we’re guessing the next-gen Aveo).

If demand for the next-gen Malibu increases (as it should once economic conditions improve), it’s possible that more than one plant will be needed to produce the sedan. According to Jim Hall of 2953 Analytics, “The Malibu traditionally has been a multiple-plant vehicle when the market was doing well.”

The 2012 Malibu, shown to reporters during the sneak-peak of GM’s future line-up back in August, is expected to be a little shorter than the current model and get better fuel economy. It’s widely expected to replace GM’s international midsize sedan – the Chevy Epica (aka Holden Tosca) – and utilize the Epsilon 2 platform, compared to the current Malibu’s Epsilon 1 architecture.

It’s also possible that the Hamtramck plant will produce future vehicles based on the Volt powertrain, such as the recently-confirmed-for-production Cadillac Converj. Plant workers are hopeful, with Moultrie saying, “We’re trying to get the whole line of electric vehicles. If we did, we would be putting our best foot forward.”

Since volume for the Volt will most likely not be high enough to warrant an entire plant in the first few years of the EV’s production, having the flexibility to produce the Malibu at Detroit-Hamtramck makes sense.