GM has announced that all V-8 powered Chevrolet and GMC trucks now feature variable valve timing (VVT) for the 2010 model year. A quick trip back to engineering 101 reminds us that VVT is a piston technology that enables continuous control of valve opening and closing. The end result is better engine breathing, with fewer emissions and improved fuel economy.

VVT has already been available on GM’s small-block 6.0L and 6.2L V-8s. The widely-anticipated addition of VVT to the 4.8L and 5.3L V-8s completes its rollout in the truck small block V-8 engine line. GM made VVT possible by adding a cam phaser to the end of the camshaft that electro-hydraulically controls cam position by taking in information from a sensor and the engine control module.

GM is reporting that when paired with cylinder deactivation (Active Fuel Management) on the 5.3L V-8, VVT helps deliver segment-leading fuel economy in the 2010 GMC Sierra and Chevy Silverado pickups:

This is music to the ears of GM truck fans the world over. Now if we could only get those Colorado and Canyon replacements… like… today – that would be great!

Here is a close-up of the cam phaser assembly used in Chevy and GMC small block V-8s. Shown (from left) is the central valve bolt, target wheel, return spring and the hydraulic unit with sprocket. The engine control module directs the phaser to advance or retard cam timing, depending on driving demands. 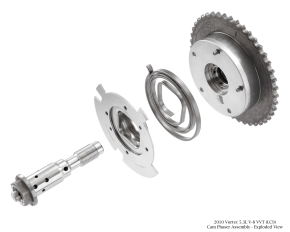