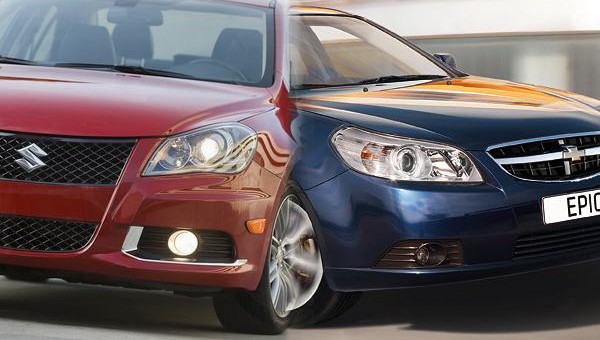 Update (huge thanks to all GMI forum members, including Bravada, Butz, Tagline, WishIHadATruck, and biggestGMfan): an interesting discussion on GM Inside News Forums has revealed that the original article might be inaccurate: the Tosca/Epica uses the old Daewoo V250 platform. This platform is an evolution of the V200 (Daewoo Magnus), which itself is a stretched variant of the V100 platform from the Daewoo Leganza (the Magnus is the “mega” Leganza, get it?). Opel may have been involved in the V200/V100 design, since Daewoo vehicles were hand-me-down Opel models. Also, The Daewoo T/J/V 100 models were developed in cooperation with several GM subsidiaries and suppliers, but nothing more than that.

As for the Kizashi – it might or might not have any relationship with any GM architecture. Suzuki tends to use certain GM platform components, such as the Suzuki Grand Vitara, which is more or less based on GM’s Theta platform. However, the Grand Vitara contains a longitudinally-mounted engine while the Theta is set up for the transverse application. So at this point, there is no concrete evidence to suggest that the Kizashi is in any way related to the V250/Epica/Tosca or the Epsilon. It’s also important to keep in mind that the Epsilon architecture is in no way related to the V250. In any event, here is the original article:

In the most recent Money Pit segment, I expressed my concern about GM using two completely separate platforms to serve the international midsize sedan market. More specifically, the Chevrolet Epica (aka Holden Epica/Daewoo Tosca/Chevrolet Tosca) – available outside of North America – is the same size as the Opel Insignia (Epsilon II) and the Chevy Malibu (Epsilon), but is underpinned by a completely different platform! We don’t know much about this platform, other than it’s a derivative of a legacy Daewoo architecture. In any case, the fact that GM is using two completely different platforms for vehicles in the same class results in increased costs and contributes to GM’s current financial position.

So you could imagine my surprise when I discovered that the newly-unveiled Suzuki Kizashi actually shares its 106.3 inch wheelbase platform (2700 mm), part for part, with the Chevrolet Epica! Now if you aren’t familiar with the Kizashi, it’s a larger-than-usual compact car that will replace the Suzuki Verona, and is due to go on sale in the beginning of 2010. The reason the Kizashi shares what otherwise is a GM-developed platform is because of a long-standing arrangement between GM and Suzuki, with Suzuki having made such vehicles as the Geo Metro and Geo Tracker for The General.

I thought you may have enjoyed this little tid-bit of information. It’s definitely news to me!

Check out the high-res shots of the Chevy Epica/Tosca and the Suzuki Kizashi after the break!