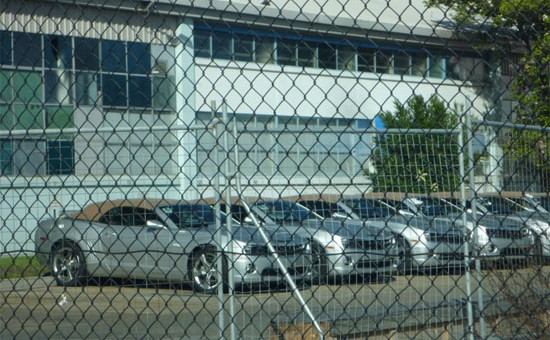 Surprise! A member of the Camaro5 forums has spotted eight Camaro Convertibles right outside the Holden factory in Melbourne, Australia. The poster, who goes by handle of isszy, also said that all the verts were left-hand drive. This means that the cars were built to be tested for, ironically, all markets outside of Australia.

Out of the eight models, seven have a tan cloth roof with the silver body – which, if you ask this particular blogger, is not befitting to the car. But if you look close at the very end of the second photo, you will see one particular model with a black cloth roof and silver body combo. That seems more suitable for a car of Camaro’s caliber, even though I am a huge antagonist of soft drop tops.

The Camaro convertible should arrive next year as a 2011 model, which will compete directly with the Ford Mustang convertible. It has been confirmed that the third pony car coupe, the Dodge Challenger, will not have a convertible version since the chassis would require a lot of stiffening if the roof were to be removed. That leaves Toyota’s infinitely hideous, FWD, and bloated Camry Solara as the third competitor to the Camaro drop-top (from a purely price-comparison perspective – we don’t actually expect anyone to cross-shop the two). Go Camaro, Go!